Phở ga (chicken) is a variation of one of Vietnam’s famous and most exported dishes phở bo – Beef noodle soup.

There are distinctions between the dishes and it’s not as simple as just a substitution of proteins.

To begin with, the chicken phở broth is much lighter than the beef broth. The end result tends to have less colour depth, too.
phở with beef, utilises strong aromatic flavours such as star anise and and cloves to make the broth so flavourful, whereas the chicken version focuses on ginger, coriander (seed and leaf) and fish sauce to intensify the chicken broth. It makes sense, the flavours better coexist together. 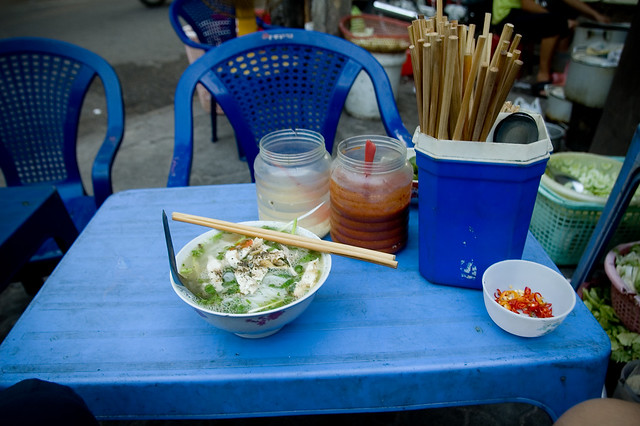 Photo sourced from Flickr via a Creative Commons License, no modifications made. Thanks, Jonathan Lin

Fixings are similar, for both dishes the meat is served with banh phở – the specific type of noodles for phở, – they are different from mien noodles, or bún noodles which are used in other Vietnamese dishes – with some thinly sliced onion and lime segments. Chicken phở is finished with thinly sliced lime leaf and coriander leaves.

It has a much softer taste than it’s beefy compatriot and with a squeeze of fresh lime and a dollop of chilli sauce is just as good a flavour hit as the beef.
My only fault is that the chicken will, invariably contain bones and lumps of cartilage but the silver lining to that same dark cloud is that the chicken phở has skin and gelatinous chicken meat. – Delicious texture & flavour!

It can, like many Vietnamese soups be accompanied by quay – the Chinese deep fried doughnuts also known as youtiao or crullers.

Thanks for visiting! You can join us on Facebook, for more pictures, and other bits and pieces. You can also follow us via email & if you liked our posts please share them using the little social media buttons below.